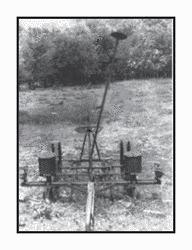 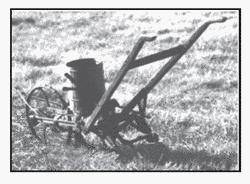 In the early part of the twentieth century there were three distinct designs of corn planters in use. One was a one-horse implement primarily used for dropping corn kernels in a furrow, then covering them with dirt and pressing the dirt down; however, such planters could also plant seeds of other crops such as beans, peas, grain sorghum, and, with the proper attachment, cotton as well. Another planter was the two-row two-horse check-row planter. While this planter was also primarily used for planting corn, other similarly sized seed could also be planted. It planted the seed in each row even with the seeds in the previous rows so that cultivation could not only be up and down rows, but at right angles to them as well. The seed spacing was done by stretching a long (up to a quarter-mile) length of wire with uniformly spaced bumps on it from one end of the row to the other. As the planter traveled along the wire, the bumps on the wire tripped the planter seed-dropping mechanism. The wire was moved over the planter’s as each pair of rows was planted. As long as the new position of the starting bump was kept in line with previous starting positions, all of the seed locations along the entire row would be in line with the comparable locations on all previous rows. The third planter was a hand planter that held less than a pint of seed corn, was carried by hand, and was used only where a small amount of planting was required, as when a poor stand occurred in a short section of a row, and some replanting was required.

Feedback
Flashcards & Bookmarks ?
Please log in or register to use Flashcards and Bookmarks. You can also log in with
Flashcards ?
My bookmarks ?
+ Add current page to bookmarks
TheFreeDictionary presents:
Write what you mean clearly and correctly.
Mentioned in ?
References in periodicals archive ?
Bill Vossler reports on Steve Ringen's restored check-row planter, an implement that enabled cross-cultivation; Clell G.
Growing like a weed
At shows, Steve often uses a Case 45 check-row planter with his '41 SC.
Case connection: Minnesota man builds collection around boyhood memories
Steve gravitates to the piece marked by exceptional artistry and design, whether it's a buggy tag or a cast iron seat or a check-row planter.
In the eye of the beholder
It was called a check-row planter, and it relied on a length of wire stretched and staked from one end of the field to the other, spooled through the planter, to drop seed kernels at precise distances along each row.
Precision farming: antiquated check-row planter surprisingly accurate
Unique displays allow up-close and personal examination of relics of the past, like this check-row planter. 8.
John Deere 101: focus on education sets gathering of the green apart
Could he have been using the check-row planter method with a "check-line" wire for planting his corn, and do you know if danger from lighting would be a possible while planting corn with this method?
Was check wire dangerous?
David Chambers, Lincoln, Neb., who says he's planted a lot of corn with a check-row planter, adds this to the discussion:
Check-row planting by the book
Literally hundreds of patents were issued during the last half of the 19th century for check-row planter mechanisms, check-lines and the knots or buttons that tripped the planter.
The check-row revolution: check-row planters put corn fields on the straight-and-narrow
Planting corn with a check-row planter wasn't simple.
Check-row planting was a tricky technique