or Au·to·harp  (ô′tō-härp′)
n.
A musical instrument resembling a zither equipped with a row of buttons, each of which damps all of the strings except those forming a desired chord.
[Originally a trademark.]

(ˈɔːtəʊˌhɑːp)
n
(Instruments) trademark a zither-like musical instrument used in country-and-western music, equipped with button-controlled dampers that can prevent selected strings from sounding, thus allowing chords to be played. It is plucked with the fingers or a plectrum

(ˈɔ toʊˌhɑrp)
n.
a zither having buttons that when depressed damp all strings except those to be sounded.
[1880–85] 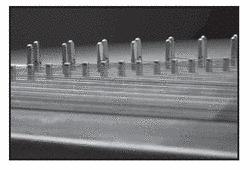 Feedback
Flashcards & Bookmarks ?
Please log in or register to use Flashcards and Bookmarks. You can also log in with
Flashcards ?
My bookmarks ?
+ Add current page to bookmarks
TheFreeDictionary presents:
Write what you mean clearly and correctly.
Mentioned in ?
References in periodicals archive ?
His range of instruments include the fujara - a large threehole flute played by Slovakian shepherds, a Chinese reed instrument called a ba-wu, and his famous 74-string electric European chord zither.
Andrew's world of inspiration; Folk