(flo͞ot)
n.
1. Music
a. A high-pitched woodwind instrument consisting of a slender tube closed at one end with keys and finger holes on the side and an opening near the closed end across which the breath is blown. Also called transverse flute.
b. Any of various similar reedless woodwind instruments, such as the recorder.
c. An organ stop whose flue pipe produces a flutelike tone.
2.
a. Architecture A long, usually rounded groove incised as a decorative motif on the shaft of a column, for example.
b. A similar groove or furrow, as in a pleated ruffle of cloth or on a piece of furniture.
3. A tall narrow wineglass, often used for champagne.
v. flut·ed, flut·ing, flutes
v.tr.
1. Music To play (a tune) on a flute.
2. To produce in a flutelike tone.
3. To make flutes in (a column, for example).
v.intr.
1. Music To play a flute.
2. To sing, whistle, or speak with a flutelike tone.
[Middle English floute, from Old French flaute, from Old Provençal flaüt, perhaps a blend of flaujol, flageolet (from Vulgar Latin *flābeolum; see flageolet) and laut, lute; see lute1.]
flut′er n.
flut′ey, flut′y adj.
American Heritage® Dictionary of the English Language, Fifth Edition. Copyright © 2016 by Houghton Mifflin Harcourt Publishing Company. Published by Houghton Mifflin Harcourt Publishing Company. All rights reserved. 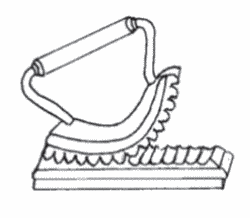 A clothes iron in two pieces, with mating corrugated surfaces. The corrugations allowed dress ruffles to be ironed.
1001 Words and Phrases You Never Knew You Didn’t Know by W.R. Runyan Copyright © 2011 by W.R. Runyan