a horse’s headgear; to take offense: She bridled at the implication that she didn’t have the right to wear white.
Not to be confused with:
bridal – pertaining to a bride or a wedding: She chose a lovely bridal gown.
Abused, Confused, & Misused Words by Mary Embree Copyright © 2007, 2013 by Mary Embree

(brīd′l)
n.
1. A harness, consisting of a headstall, bit, and reins, fitted about a horse's head and used to restrain or guide the animal.
2. A curb or check: put a bridle on spending.
3. Nautical A span of chain, wire, or rope that can be secured at both ends to an object and slung from its center point.
v. bri·dled, bri·dling, bri·dles
v.tr.
1. To put a bridle on.
2. To control or restrain: could not bridle his excitement at the news. See Synonyms at restrain.
v.intr.
1. To lift the head and draw in the chin in anger or resentment.
2. To be angry or resentful; take offense: bridling at the criticism.
[Middle English bridel, from Old English brīdel.]
bri′dler n.
American Heritage® Dictionary of the English Language, Fifth Edition. Copyright © 2016 by Houghton Mifflin Harcourt Publishing Company. Published by Houghton Mifflin Harcourt Publishing Company. All rights reserved.

(ˈbraɪdəl)
n
1. (Horse Training, Riding & Manège) a headgear for a horse, etc, consisting of a series of buckled straps and a metal mouthpiece (bit) by which the animal is controlled through the reins
2. something that curbs or restrains; check
3. (General Engineering) a Y-shaped cable, rope, or chain, used for holding, towing, etc
4. (Mechanical Engineering) machinery a device by which the motion of a component is limited, often in the form of a linkage or flange
vb
5. (Horse Training, Riding & Manège) (tr) to put a bridle on (a horse, mule, etc)
6. (Horse Training, Riding & Manège) (intr) (of a horse) to respond correctly to the pull of the reins
7. (tr) to restrain; curb: he bridled his rage.
8. (often foll by: at) to show anger, scorn, or indignation
[Old English brigdels; related to bregdan to braid1, Old High German brittil, Middle Low German breidel]
ˈbridler n
Collins English Dictionary – Complete and Unabridged, 12th Edition 2014 © HarperCollins Publishers 1991, 1994, 1998, 2000, 2003, 2006, 2007, 2009, 2011, 2014

n., v. -dled, -dling. n.
1. part of the tack or harness of a horse, consisting usu. of a headstall, bit, and reins.
2. restraint; curb.
3. a link, flange, or other attachment for limiting the movement of any part of a machine.
4. a rope or chain secured at both ends to an object, and itself held or lifted by a rope or chain secured at its center.
v.t.
5. to put a bridle on.
6. to control or hold back; restrain; curb.
v.i.
7. to draw up the head and draw in the chin, as in disdain or resentment.
8. to show resentment.
[before 900; Middle English bridel, Old English brīdel for brigdels]
bri′dle•less, adj.
bri′dler, n.
Random House Kernerman Webster's College Dictionary, © 2010 K Dictionaries Ltd. Copyright 2005, 1997, 1991 by Random House, Inc. All rights reserved. 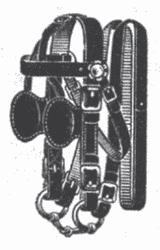 The headgear with which a horse is guided. It includes a Bit, which goes in the horse’s mouth, and various straps that go around the horse’s head and hold the bit in place. Horses become quite adroit at spitting out bridle bits so a well-designed bridle is a necessity. Unlike the rest of the harness, which was quite late in development, bridles looking remarkably like those still used on horses first appeared in ninth century b.c. Mesopotamia relief carvings.
1001 Words and Phrases You Never Knew You Didn’t Know by W.R. Runyan Copyright © 2011 by W.R. Runyan
ThesaurusAntonymsRelated WordsSynonymsLegend:
Switch to new thesaurus
Based on WordNet 3.0, Farlex clipart collection. © 2003-2012 Princeton University, Farlex Inc.

noun
1. rein, curb, control, check, restraint, trammels She dismounted and took her horse's bridle.
verb
1. get angry, draw (yourself) up, bristle, seethe, see red, be infuriated, rear up, be indignant, be maddened, go crook (Austral. & N.Z. slang), raise your hackles, get your dander up (slang), get your back up He bridled at the shortness of her tone.
2. curb, control, master, govern, moderate, restrain, rein, subdue, repress, constrain, keep in check, check, keep a tight rein on, keep on a string I must learn to bridle my tongue.
Collins Thesaurus of the English Language – Complete and Unabridged 2nd Edition. 2002 © HarperCollins Publishers 1995, 2002

Feedback
Flashcards & Bookmarks ?
Please log in or register to use Flashcards and Bookmarks. You can also log in with
Flashcards ?
My bookmarks ?
+ Add current page to bookmarks
Mentioned in ?
References in periodicals archive ?
The bridled tern, which has arrived on the Farne Islands, is thought to be the same bird which paid a visit last July, when it stayed for two weeks and attracted around 800 bird watchers.
Bridled passion has birders in a flurry on Farnes
The bridled tern on a rare visit to the Farne Islands
Caribbean visitor does a good tern for Farne Islands