(fôrj)
n.
1. A furnace or hearth where metals are heated or wrought; a smithy.
2. A workshop where pig iron is transformed into wrought iron.
v. forged, forg·ing, forg·es
v.tr.
1.
a. To form (metal, for example) by heating in a forge and beating or hammering into shape.
b. To form (metal) by a mechanical or hydraulic press.
2. To give form or shape to, especially by means of careful effort: forge a treaty; forge a close relationship.
3. To fashion or reproduce for fraudulent purposes; counterfeit: forge a signature.
v.intr.
1. To work at a forge or smithy.
2. To make a forgery or counterfeit.
[Middle English, from Old French, from Vulgar Latin *faurga, from Latin fabrica, from faber, worker.]
forge′a·bil′i·ty n.
forge′a·ble adj.
forg′er n.

v. forged, forg•ing.
n. v.t.
1. to form by heating and hammering; beat into shape.
2. to form or make, esp. by concentrated effort; fashion: to forge a treaty.
3. to imitate (handwriting, a signature, etc.) fraudulently; make a forgery of.
v.i.
4. to commit forgery.
5. to work at a forge.
n.
6. a fireplace, hearth, or furnace in which metal is heated before shaping.
7. the workshop of a blacksmith; smithy.
[1250–1300; Middle English < Old French forgier < Latin fabricāre to fashion; see fabricate]
forge′a•ble, adj. 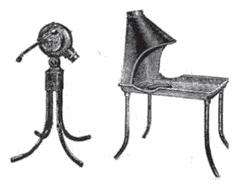 A small, open furnace that burned coal and was supplied with forced air from a bellows or handoperated blower. The forge was used by blacksmiths to heat iron enough (generally a red heat) to be shaped or welded. The left item in the illustration is a blower. To the right is a forge. Air from the blower was piped to the bottom of the forge so it could flow up through the burning coal.
1001 Words and Phrases You Never Knew You Didn’t Know by W.R. Runyan Copyright © 2011 by W.R. Runyan
ThesaurusAntonymsRelated WordsSynonymsLegend:
Switch to new thesaurus
Based on WordNet 3.0, Farlex clipart collection. © 2003-2012 Princeton University, Farlex Inc.

Feedback
Flashcards & Bookmarks ?
Please log in or register to use Flashcards and Bookmarks. You can also log in with
Flashcards ?
My bookmarks ?
+ Add current page to bookmarks
Mentioned in ?
References in classic literature ?
The deserted counting-houses, with their secrets of books and papers locked up in chests and safes; the banking-houses, with their secrets of strong rooms and wells, the keys of which were in a very few secret pockets and a very few secret breasts; the secrets of all the dispersed grinders in the vast mill, among whom there were doubtless plunderers, forgers, and trust-betrayers of many sorts, whom the light of any day that dawned might reveal; he could have fancied that these things, in hiding, imparted a heaviness to the air.
View in context
This jail was a Noah's ark of the city's crime--there were murderers, "hold-up men" and burglars, embezzlers, counterfeiters and forgers, bigamists, "shoplifters," "confidence men," petty thieves and pickpockets, gamblers and procurers, brawlers, beggars, tramps and drunkards; they were black and white, old and young, Americans and natives of every nation under the sun.
View in context
He took the money which Athos offered to him, and after turning and turning it over and over in his hands, suddenly cried out that it was bad, and that he would have him and his companions arrested as forgers.
View in context
'I'd have engaged you,' he said, 'on the recommendation of a syndicate of forgers and three-card-trick men.'
View in context
Now if Barbicane was a great founder of shot, Nicholl was a great forger of plates; the one cast night and day at Baltimore, the other forged day and night at Philadelphia.
View in context
He accompanied this restitution with a most severe reprimand, during which Colbert contented himself with examining, feeling, even smelling, as it were, the paper, the characters, and the signature, neither more nor less than if he had to deal with the greatest forger in the kingdom.
View in context
Accordingly, the forger was put to Death; the utterer of a bad note was put to Death; the unlawful opener of a letter was put to Death; the purloiner of forty shillings and sixpence was put to Death; the holder of a horse at Tellson's door, who made off with it, was put to Death; the coiner of a bad shilling was put to Death; the sounders of three-fourths of the notes in the whole gamut of Crime, were put to Death.
View in context
"First I was a forger," answered Andrea, as calmly as possible; "then I became a thief, and lately have become an assassin." A murmur, or rather storm, of indignation burst from all parts of the assembly.
View in context
Not a forger, any way, he mutters; and Jonah is put down for his passage.
View in context
A forger from the state prison seizes the arm of a distinguished financier.
View in context
This person appears to have been none other that Beddington, the famous forger and cracksman, who, with his brother, had only recently emerged from a five years' spell of penal servitude.
View in context
As long as it was only the left drawer instead of the right, and red ink instead of black, I thought it must be the chance blunders of a forger, as you say.
View in context