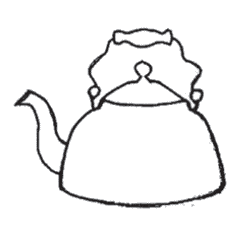 A covered metal pot with a bail and a spout. Before hot water heaters were available, teakettles were kept on the kitchen stove to supply hot water for such things as shaving and hand washing. A teakettle full of boiling water was also a convenient place to cook hard-boiled eggs. (When kitchen stoves burned either coal or wood, they usually had a fire in them all day, so a teakettle on the stove provided a daylong source of hot water.)
1001 Words and Phrases You Never Knew You Didn’t Know by W.R. Runyan Copyright © 2011 by W.R. Runyan
ThesaurusAntonymsRelated WordsSynonymsLegend:
Switch to new thesaurus
Based on WordNet 3.0, Farlex clipart collection. © 2003-2012 Princeton University, Farlex Inc.
Translations
غَلَّايَةُ
konvice
kedel
Kessel
κατσαρόλα
hervidor de agua
vedenkeitin
bouilloire
kotlić
bollitore
ケトル
주전자
ketel
kjele
czajnik
chaleira
чайник
tekokare
กาต้มน้ำ
çaydanlık
ấm đun nước
壶

Feedback
Flashcards & Bookmarks ?
Please log in or register to use Flashcards and Bookmarks. You can also log in with
Flashcards ?
My bookmarks ?
+ Add current page to bookmarks
Mentioned in ?
References in classic literature ?
Peter shuffled to his feet, caught up the teakettle and mixed him some hot water and whiskey.
View in context
The shades were up, and there was a roaring fire in the stove; the teakettle was singing and bubbling as it sent out a cloud of steam, and pushed over its capacious nose was a half sheet of note paper with "Compliments of Rebecca" scrawled on it.
View in context
"Such a cunning teakettle and saucepan, and a t^te-.-t^te set, and lots of good things to eat.
"I do wish I could have a nice room like this, and a cat and a bird that would n't eat each other up, and a dear little teakettle, and make just as much toast as I like."
View in context
Phoebe and the fire that boiled the teakettle were equally bright, cheerful, and efficient, in their respective offices.
View in context
"Have you torn the house down enough to heat the teakettle?"
View in context
Teakettle ($39.99): Beautifully crafted and colorful teakettles are perennial favorites for their ease of use, convenience, and the added bonus of elevating kitchen dcors.
Holiday gifts to bring cheer to coffee and tea lovers
4 The Catherine enamel-on-steel teakettle from Chantal was inspired by the shape of a royal crown.
SIZZLING SURFACES: Surface interest heightens at this month's International Home + Housewares Show, as cookware introductions strive to help make cooking even faster and clean up a snap with new technology. The result is more durable surfaces, able to handle the daily chores of meal making. But it's not all about function. Many introductions bring style as well in terms of shapes, colors-even animal designs
GOELDIBERE, 2005-13, for instance, is a teakettle with the word goeldibere written on its side.
Carlos Zilio: ANITA SCHWARTZ GALERIA DE ARTE
The Ibo people and Twi disappeared beneath the water of the island's bay at Teakettle Creek.
In the Time of the Drums
and laughing and I was laughing like the blue teakettle
Page of Winter
Not the mantle clock, still ticking, striking the hours as we worked, not the state spoons she loved, the fashion magazines, the teakettle. Nothing was enough, you said, until-- until, sorting the hall closet, I uncovered the nativity set you remembered, hand-carved and painted, though chipped in spots: an ear here, a finger there, a cow's horn gone.
Nativity